We arrived this weekend to see that our farmer neighbor had plowed our field for us as promised.  Moving forward we are going to avoid disturbing the soil so deeply, but this first year we decided plowing was the only way to prep the entire grass-covered field in time (the alternative would have been sheet mulching the whole .5 acres, which would have taken at least forever). The bare dirt seemed vulnerable and unnatural but was very exciting.  It also made the field seem much smaller!

This morning we spent some time going over options for row/bed layout of the field.  Because of the picnic tree we left in the middle, circles seemed like an obvious choice.  Aside from aesthetics, circular rows would prevent runoff turning to erosion (the field slopes in all directions) and enable a better plants to paths ratio.

We also considered doing a keyhole layout.  This layout gives an even better plants to paths ratio, and the pattern is very organic.

In the end we decided on rectangular sections with straight rows.  Even with everything we know about permaculture and the value of undulating lines, traditional rows seemed like the best idea. We thought it would be easy enough to push a wheeled seeder or wheel hoe along a curved path, but the idea of curved row covers was a little off.  Then we thought about biodegradable paper/plastic mulches.  Those do not undulate.  Those are straight.  How does a chicken tractor work out on curved rows?  Path of least resistance it is.  We’re still planning to work with a keyhole design somewhere else.  Maybe establish a keyhole berrypatch or herb area?

We also decided on our crop rotation – we worked through possible spacing/order with index cards over a map of the field.  Not planting the same family of vegetable in the same plot 2 years in a row prevents disease and soil nutrient deficiency.  We’ve ended up with 12 different plots, so we’re going to have TWELVE YEARS before a family makes its way back to the same piece of land.  Our categories are:

Once all that was worked out we went out and limed the field to raise the pH (it was slightly too acidic).  We used calcitic lime instead of the more common dolomitic lime because dolomitic has a lot of magnesium and our field has too much magnesium (hmmm… wonder how that happened).  Too much magnesium makes soil particles bind too tightly together, and since we are clay as it is we can’t have that.

Once the lime is settled in we can apply greensand and colloidal phosphate – rock powders which slowly break down in the soil to release their nutrients.  So we’re just waiting on that and THE WEATHER.  Even though it has been close to 90 already this year there was a hail warning the other night, and it is supposed to freeze the next two nights.  We have a whole army of little guys waiting to go in the ground (they’ve been spending their time outdoors, but tonight we brought them into the mudroom because of the extreme cold). 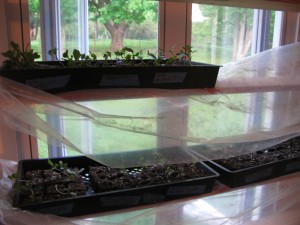 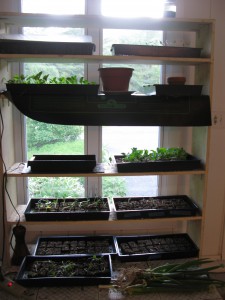