We’ve gone from nearly 100% germination rates for the soil blocks down to… very, very low.  Partially it’s too hot (some of these seeds should have been germinated in the mudroom, where it is cooler), partially they weren’t getting watered, and patially they are getting munched after they do sprout.  (This has been going on since early July.)  On the up side we get to recycle the blocks and haven’t had to mix up a new batch of soil for a while.

We’re feeling pretty good about the amount of food we will have for the tail end of the CSA.  Hopefully we won’t have to supplement as we did at the beginning.  We’re already just about half-way through (this Monday will be week 10)! 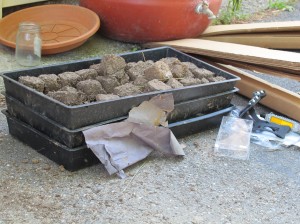 Share this post
Alien Corn
this is getting a little overwhelming
Copyright © Growing Heart Farm - All Rights Reserved.